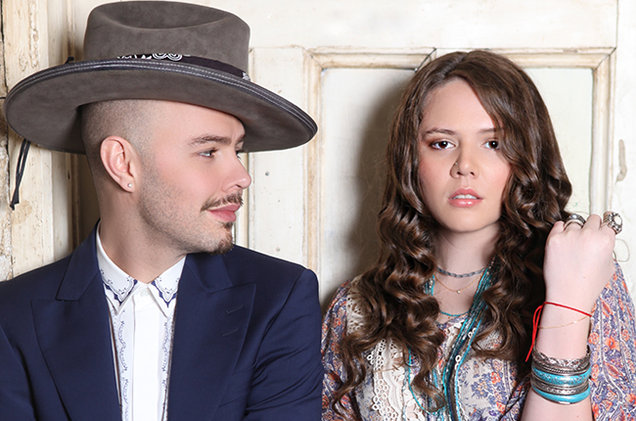 Mexican brother and sister duo Jesse & Joy are well aware that when you listen to their music, you almost need to have a box of tissues nearby. This is not because their music is depressing (although if you’re going through a breakup it can certainly seem that way), but because it’s so visceral. This in itself is a gift. But then you factor in the powerful instrument that is Joy’s voice, Jesse’s production savvy and their unique bond, and you’ve got something extra special.

Vocally, there’s a newfound confidence. The first single “Ecos de Amor” (Echoes of Love) positions Joy as a soulful songstress in her prime. The visuals are equally stunning, thanks to Samuel Bayer (Michael Jackson, Rolling Stones, Justin Timberlake) who directed the single’s video.

That Jesse & Joy are doing it big is no coincidence. It’s been 10 years since their Esta es mi Vida debut, and, as Jesse will humbly tell you, “we know there’s something we do that connects.” So the trick this time around was staying true to their sound while exhibiting growth. “It’s a challenge we were totally up for and we put everything we have into this,” says the elder Huerta (he’s 32; Joy is 29).

Billboard spoke via phone to the two siblings, who were at home in Mexico City and offered exclusive details on the album.

What can people expect on the new album?

Jesse: Coming from an album like ¿Con Quién Se Queda el Perro? the challenge was big. We got to that point because we did things we had never done before and I think this album is one of the most diverse we’ve done in terms of rhythms. It’s a bit riskier, even though the first single “Ecos de Amor” doesn’t necessarily show that riskier side. We chose that as the single because we wanted it to be that bridge between where we came from and where we are. We wrote most of the songs for this album during the¿Con Quién Se Queda el Perro? tour, in between hotels and studios in different cities that we played in. In fact, we wrote “Ecos de Amor” three years ago and we’ve always sort of done it that way. We take our time. Right after a tour we take some time to depressurize and spend time with family. Then we go back and see what we have, what we love, what’s left to do, and then we finish an album.

What was it like to work with various producers?

Jesse: In the past we’ve had only one producer per album, so this time around, I felt the responsibility to be the common thread, in a way, for the album’s sound, because we worked with different people in different studios. They never saw each other. We had great chemistry with Fraser and Martin. And then we went to the Dominican Republic to work with Juan Luis. We’re so happy with the final product. I know Joy’s voice better than anybody and I can honestly tell you she is sounding better than ever.

I did notice Joy is sounding different on the first single, more confident, especially in the hook.

Joy: I’m blushing, even though you can’t see me [laughs].

Jesse: I’ll say this so it doesn’t come from her. When we started singing, she was 18, and yeah, when she opened her mouth, that beautiful voice came out. But after years of touring in support of our albums, I feel like she’s learned how to control that wild horse [laughs]. She’s gotten to that point as a performer.

Joy: Working with different producers this time around allowed us to learn different things. In Fraser T. Smith’s case, there’s a very particular approach to singing that’s all about allowing your voice to be more a little bit more naked. I think that made us more vulnerable when we recorded the songs but in the end the result is more raw and pure, and people have definitely been drawn to it.

How did you stay true to your sound while bringing something new to the table?

Jesse: The easiest thing is to follow a recipe or formula that has worked before. But I personally don’t like when albums all sound the same. It’s a very thin line at the same time — not just for musicians but for chefs, painters, all artists. It’s just hard to find your identity and there’s the classic mistake of the band that put out an amazing album and found its sound and then lost it. So we wanted to sound like us, but fresh. It was a challenge, but we were totally up for it. We put everything we have into this.

Joy: The more we live, the more we discover our essence as human beings. It’s been 10 years that we’ve been doing this and every tour, getting to know different cultures, has enriched us. When you sit down to write, you draw from those experiences, which is why, as Jesse mentioned, the music is more diverse than ever.

I hear there is a special duet on the album. What’s the scoop?

Jesse: We’re a band that started writing and playing songs in the living room. We didn’t meet playing at a bar or at music school. We’re a homegrown musical act and our father has always been present. He was with us when we signed our first record contract — I was 21, Joy was 18 — and he was able to protect us. So when he died – two years ago in December – it was especially difficult. We had just come off the biggest tour of our career and it was just such a contrast of high and low. Which is why this album is so personal. There’s a song we wrote for him called “Un Besito Más” and it’s a duet with Juan Luis Guerra (he also produced it). It’s sort of our way of saying to our dad, “Thank you for everything.” And it could be interpreted a couple different ways. So being that our album is about love, and the joy and the pain that comes from love, we figured it was the perfect title.

Joy: We didn’t want the vibe of the song to be tragic, or corta venas. We wanted it to have a feeling of hope that there could be un besito más, that we might be able to give him another kiss in another lifetime.

How amazing was it working with Juan Luis Guerra? I’ve been to his studio and it is easily the most Zen place on earth.

Jesse: My dad loved Juan Luis. His vibe is so clear and clean and spiritual. When you’re in his studio you don’t even want to curse! [laughs] There’s even a little palm tree in the middle. We sent him three songs and we love that he chose that song to produce and to sing with us. It’s funny how our dad got his way even though he’s no longer here. Working with Juan Luis was in our bucket list and this song makes it all the more special.

Joy: Recording it was tough, though. I broke into tears several times. The best way to describe the song is that it’s like this warm hug, this protective embrace. And it’s also a delicious bachata in Juan Luis’ signature style. And there’s other surprises we can’t wait to share.