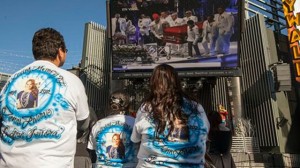 The ceremony was not open to the press, only fans with tickets were able to attend, although a livestream was made available by several media outlets. Tickets, which were $1, appear to have sold out within the hour after they were made available on Tuesday. Even fans who didn’t get tickets found a place outside the theater to honor their idol, like Lisseth De Paz, 13, who watched the ceremony from a giant screen and held a Jenni Rivera poster and a white rose. “I love her,” she said. “I grew up listening to her music. My mom introduced me. I’ll always remember who she was and how she turned her stories into songs.”

Xochitl Rosas, 36, also had to watch from the outside. “I liked her trajectory, her life was meaningful to me,” she said. “Her songs gave me strength. She overcame domestic violence. It didn’t hold her back. She pushed forward. That helped me as a single mom to help my children and have them excel at anything.”

Ana Ramos,15, was inside. “Her kids were crying and that made me cry,” she said. “Her son [Johnny, her youngest] is 11 and he doesn’t have a mom. It was sad. But she will always be remembered. She was unforgettable.”

The Rivera family sent an email to members of the press earlier this week describing the ceremony as a “celestial graduation,” and, in lieu of flowers, asked that people donate to the Jenni Rivera Love Foundation, which helps victims of domestic violence.

The two-hour ceremony began with a prayer led by Pedro Jr., and included a mix of moving tributes from Rivera’s children (Chiquis, Jacqui, Jennicka, Michael, and Johnny), her siblings (Pedro Jr., Lupillo, Gustavo, Juan, and Rosie), and her parents Rosa and Pedro, among others. Rivera’s manager Pete Salgado, fighting back tears, described her as ‘a brown superhero.’ Her mother, Rosa, recalled the times Jenni would ask her for strength. “I still hear her tell me ‘You’re so strong, give me some of that strength,'” said Rosa. ‘And I would tell her, ‘You already have it; I gave it to you when you were born.'”

Most of Rivera’s family members dressed in white and red, Rivera’s favorite color. A video was played of Rivera at one of her concerts, singing “Mariposa de Barrio.” The video showed Rivera speaking candidly to the audience: “I’ve always used the metaphor of the butterfly for my life,” she said. “My life has not been easy, it has been very hard. I can compare my life to that of a caterpillar… God is so great, he changed my suffering into happiness, he gave me my family, my brothers, my parents, my children, my grandchildren, lots of great friends, and every day I thank him for all the love from my fans. You have lifted me up in every difficult moment of my life, you’ve accepted me just the way I am.”

Radio programmer Pepe Garza of Que Buena 105.5, who broke Jenni Rivera and her brother Lupillo on Southern California radio in the mid-90s, said, “It was her mistakes that made us know she was one of us, and we rooted for her every day. Her fans put her on a pedestal, because they knew that wherever she went, she’d carry the voice of all of them with her. Que viva la diva!”

The banda superstar’s life was cut tragically short at the age of 43 in a plane crash on December 9. She, along with six other passengers, including Rivera’s publicist, her make-up artist, and her lawyer, died. Her remains were identified in Monterrey, Mexico last week by her brothers Lupillo, Juan, and Gustavo, and brought home to Long Beach, Calif., or as she used to joke in Spanish, “Playa Larga.”

The family has informed the media that Rivera’s funeral will be a private event. She will be laid to rest at All Souls Cemetery in her home city of Long Beach.

-With additional reporting by Albert Sabaté