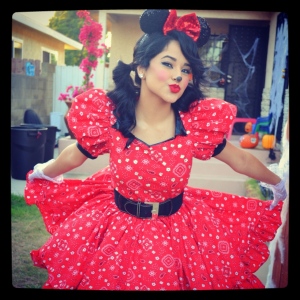 By Becky G, as told to Angie Romero

Everyone loves Halloween, right? One of my friends, his name is Coco, he designs for LMFAO, he offered to create a costume for me. And he said, ‘Hey, what if we made the dress out of a bandanna for a gangsta Minnie Mouse?” The dress came out adorable, and up close you can really see the details in the dress.

Well, for me, it’s not just the fun costumes that I love about October. It’s also my little brother Frankie’s birthday a few days before Halloween, so this year we made it extra special. He turned 13, and we had well over 30 people over at my house, 17 of them grandchildren.

My mom has always been the party planner in the family, she comes up with the ideas. She’s the one who gets things together. Frankie’s birthdays have always been kind of Halloween-based, but this was the first time that we had all these activities like pumpkin-carving contests, so it was really, really cool.

One thing I’m learning as I get older is to appreciate every moment that I get with family, especially my grandparents. They’re getting a little older and they’re having difficulty with certain things.

My dad’s dad, who came from Mexico in 1974, could retire, but he doesn’t want to. The way he was raised was so you never stop providing for your family and your lady. My grandma still does the cooking and cleaning. He’s been working for so long – he works at a country club near Hollywood, doing construction and landscaping. He has a really bad knee problem. But he and my other grandparents don’t really let anything hold them back.

Family plays a really big part of my life, because they’ve been there since the beginning, even before I was born. I’m at a point in my career where it’s starting to take off, and I’m not able to spend as much time with them as I’m used to. It’s really different for me, so when I do have time with them, I really take it all in.