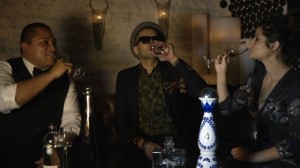 What happens in Vegas…well, you know the rest. While in town for the Latin Grammys this week, artists were celebrating their nominations and wins up and down the Strip. One of them, Sensato, was in Vegas on double duty: to perform his monster club hit “Crazy People” with Pitbull during the show, the same song that was nominated in the Best Urban Song category.

If you’ve heard the song – and unless you live under a rock, you have – then you know this 27-year-old Dominican rapper with the hyper, caricature-like flow knows a thing or two about having a good time. So I took him tequila tasting earlier in the week to the hottest new resto on the Strip, Javier’s, which has a vast selection of the agave-based drink.

Sensato, who is signed to Pitbull’s label Mr. 305 Inc., has a bright future ahead of him beyond the Latin Grammy nod (the award went to Don Omar for “Hasta Que Salga El Sol”). His new, Pitbull-assisted single “La Confesion,” which namedrops J.Lo, Sofia Vegara, Eva Longoria, Selena Gomez, Shakira, and other hot Latinas is out now, and the two bad boys are working on a full joint album, due some time next year.

Watch here as we learn a thing or two about “fine” tequila and talk about what it means to be Pitbull’s protege. Sensato played it coy when we asked for crazy stories while on tour with Pit, but we can only imagine what that’s like…

Also, check out what Sensato and other celebs told us on the Latin Grammy green carpet about their End of the World playlists, because if we’re going down this year, we’re making it count with some good company, good music, and, why not a nice adult beverage?