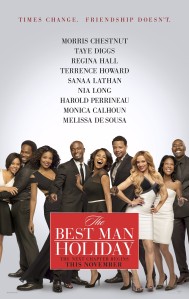 So I went to a screening of The Best Man Holiday tonight and I loved it as much as I thought I would. It’s on the level of Love Actually and I’m not even exaggerating. That’s if Love Actually had a Terrence Howard, which it doesn’t.

I’m not certain what all those actors are doing to defy the aging process (The Best Man came out in ’99!) but damn, they look good. And you can just tell how much fun they had making this movie. It’s like they just threw on some cashmere and stepped right back into these characters. Fittingly, the movie’s tag line is “Times change. Friendship doesn’t.” It will make you cry and laugh and wish you looked like Sanaa Lathan and Nia Long because, seriously, they’re still the baddest chicks in the game. Sorry, Paula Patton.

Dare I say I like it more than the original? Hard to say, so I’m gonna have to watch it this week while the sequel is fresh in my mind. Either way, go see this on November 15 when it comes out and bring all of your friends. Judging from Universal’s push on the social front, audiences are going to pack theaters, perhaps even leading to a third movie in the series, which you would not have to convince me to watch.