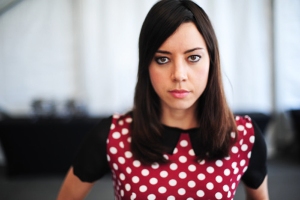 In comedy, as in any other genre, game recognizes game. So Aubrey Plaza, otherwise known as April, Amy Poehler’s snarky college intern on NBC’s mockumentary-style show Parks and Recreation, is the kind of funny that my favorite comedians — people like Conan or Chelsea — give props to.

It’s called subtlety. And it’s not exactly something Latinos are known to do on the big or small screen. Blame George Lopez– anyone who relies on muecas to elicit chuckles is going to run out of jokes eventually.

It’s like Marlon Brando once said: “We only have so many faces in our pockets.”

But as Darius, Plaza’s first major film role in this summer’s Safety Not Guaranteed, the 27-year-old, half-Puerto Rican, half-Irish actress isn’t so much funny as she is a disaffected, deeply insecure, socially awkward live-at-home college grad who has never fully dealt with the one big tragedy in her life: the death of her mother.

She’s not exactly someone you love at first sight, but there’s a transformation that happens here, and eventually, Darius becomes endearing, relatable, and most important, memorable.

It’s the kind of performance that sets off a respectable career in Hollywood, not unlike that of industry darling Emma Stone, whose ascent has been thrilling to watch – Vogue covers and all.

In the movie, a romantic comedy with sci-fi elements thrown in, three cynical Seattle Magazine employees (Plaza, New Girl’s Jake Johnson, and Karan Soni) set out to find and profile the eccentric (Mark Duplass, who is wonderful here) behind a classified ad looking for a partner to travel through time.

“It doesn’t feel like a movie from this era, you know?” says Plaza via phone from Los Angeles. She can be heard chewing on something, candy or perhaps chocolate, as she often does during interviews to counteract her awkwardness. “Most movies these days are so cynical and this one reminds me of movies I saw in the early nineties or something, ones that make you believe in magic and dinosaurs.”

To read the rest of this story, visit Fusion (ABC/Univision), where it was originally published.